Yellow Dye Is Even Worse Than We Thought by Jane Hersey

Yellow dye is even worse than we thought!

You already know that synthetic food dye can trigger learning and behavior problems; and you may be aware that some people can experience hives, asthmatic attacks, and even anaphylactic shock from yellow #5 (also known as tartrazine).   But this food coloring, which is the most widely used, is more notorious than we had imagined.

Tartrazine was given to pregnant rats in amounts that the researchers say exceed the recommended daily limits for humans.  This resulted in severe damage to the unborn pups.

The liver, kidney and spleen showed severe damage, and there were skeletal deformities, including missing limbs. 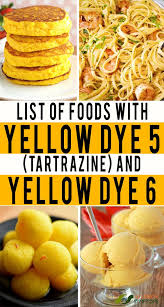